Unfortunately the mail I sent last thursday did not reach the person at Kuretake JP – the address couldn’t be located in their system (maybe the person doesn’t work there any more).

So I just filled out the online form on their Kuretake JP site, and I got a confirmation mail that they received it. I wonder whether I will be contacted by Kuretake UK (now Pirika UK) again, because in the form it was required to enter your country. If that is going to be the case, there will very probably be no further information about the cruelty-free part.

I am not very optimistic, but we’ll see.

Over the last year till February of this year, I had correspondence with Kuretake UK. The UK team are pretty terrific, always wrote back and passed my inquiries and information sheet along to the Japan Headquarters.( I just looked them up again, and they are no longer Kuretake UK, but Pirika UK).

I initially was assured that Kuretake was a cruelty-free company, but then they weren’t certain about it any longer. This was cited to probably  be because of a language barrier. And the Japan Headquarters never replied since my last mail in February.

I consequently had to take the company of my list again, without this vital part of information.

I now contacted Kuretake JP directly and hope I will receive a clear reply for us all.

So I have taken some companies off the list.

Royal Talens- why: I wrote to them last year about Ecoline brush pens and inks; I got the information about the products not being tested on animals and no animal ingredients in the products. But why not say “we don’t test on animals” and not just” these products weren’t tested on animals”. So I would have to contact them again for a clearer response; in the meantime I took them off the list. I hope I get a reply though, when I’ll write to them again, because I got no response for my Sakura inquiries this year and in the past. (Royal Talens is the European distributor of Sakura and belongs to Sakura since 1991). Overall I got the vibe that they aren’t interested in offering vegan-friendly art supplies.

Kuretake, why: First I was assured that Kuretake is cruelty-free but then later, I was informed there is a problem due to a language barrier in understanding what cruelty-free/animal testing is and they had to look into this matter. A considerable amount of time has passed and I am none the wiser. So I had to take them off the list; it does not mean they do but, again no clear answer here.

Schmincke: They wrote that they have no information about animal testing through suppliers/ sub-suppliers&raw material suppliers. Although most ingredients used in art supplies have already been tested decades ago, and might not be tested again, this is not certain. Therefore, I decided to take them down.

I always struggle with how far I should go with my definition or whether I should adapt more. In our daily life we come into contact with non-vegan-friendly things and things that might  be tested on animals all the time and we don’t even know. I am not talking about medical treatment but things we haven’t thought about, like keyboards, remote controls, cutlery, clothing (the dye used; the pesticides used for cotton)…, basically everything. We just strive to the best of our knowledge, but nobody can be 100% (maybe a hermits, making their own clothes, gathering food, making their own clothes, …)

I don’t always know how to evaluate the information I get. Is it too much to ask for raw-materials not to be tested on animals by suppliers? Some companies (not listed)  have no idea on the stance of their suppliers concerning this issue and some even wrote they would contact their suppliers now for the information; others have the knowledge of theirs that they don’t.  My inquiry form hasn’t changed, I only structured it better with my information sheet a couple of months ago, but it contains the same definition including animal testing through suppliers.

If materials have already been tested decades ago on animals, why should it be done again today, if the information is already available? I think “no animal testing through suppliers”  has to stay part of my inquiry and information sheet.

I just don’t have an explanation why some companies have this knowledge about their suppliers and others, even if they are small businesses, don’t. Do they ask no questions about where the raw materials come from and if they use the safety data sheets from their suppliers, don’t they wonder how the data is collected? Is it the easy way out to say they don’t know, instead of asking questions? Or do they know and don’t want costumers to know? Is it really about not having enough resources to check?

Instead of using watercolours in pans, you can use  watercolour pencils, sticks/gelatos and crayons  with a water-reservoir brush or stiffer regular brush, but in the way you would paint with pans.

Tip-to-tip transfer: Brush over your water-soluble crayon/stick etc. (use more strokes to intensify the colour) and then apply it onto the paper. Alternatively draw  with the crayon direcly on the edge of the paper or a separate paper and take the colour with the brush from there.

This way the colour application is much softer than drawing directly on the paper and going over the lines with a brush. You can colour a dainty little drawing or cover a DinA3 and larger paper with beautiful patterns. 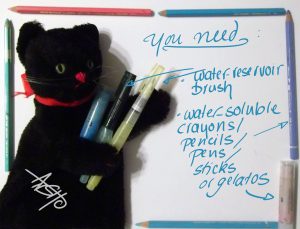 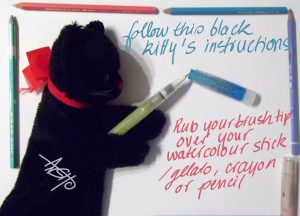 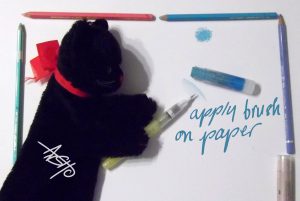 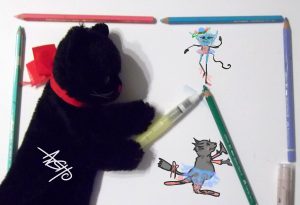 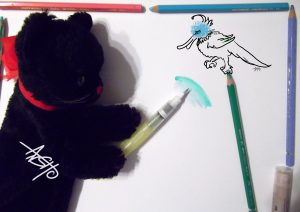 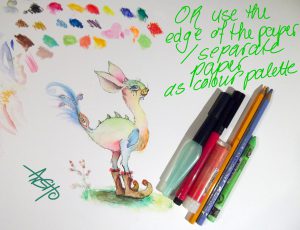 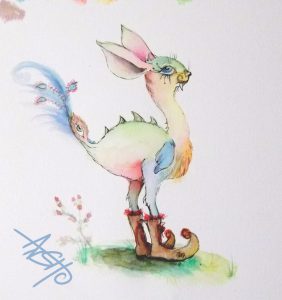 If you don’t have a watercolour travel pan set, you can always take your pencils, crayons etc. and a water-reservoir brush pen. There will be no spills, it does not take up too much space and you have double the use out of the pencils. Using them with the brush and also drawing details directly with them.

It is also something different to go over the crayon/pencil with a wet brush than immersing the whole crayon/pencil tip in water, which can damage the lead.