In my last post, I introduced you to Oozeq, a vegan plasticine, and Oozeq’s inventor sent me some to try out. 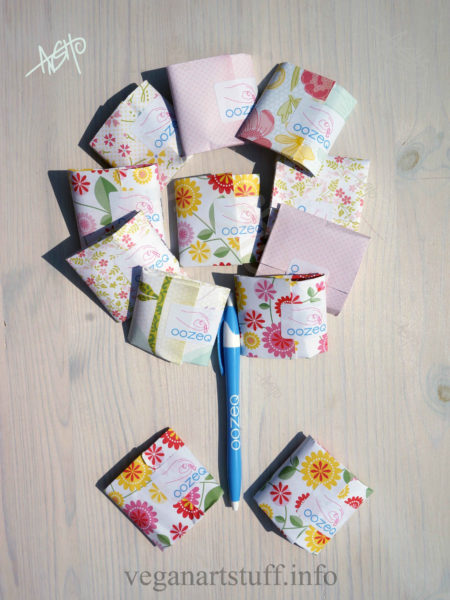 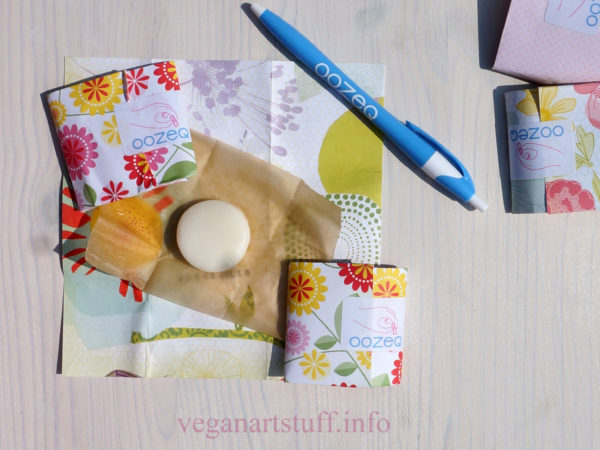 Reading up on this never dry putty, you’ll find out it is kind of the swiss army knife of doughs.  So in case any A-Team, MacGyvers or Megan Gyvers out there need plasticine, that can be used as  fondant, molds, battery,  polymer clay armatures and more, besides the two obvious ways you can use it, slime or play dough, this could be for you.

I started more traditional and kneaded it around for a minute or so (consider its long journey) to make it all smooth. Although I automatically formed a lollipop swirl and a rose in the beginning, the first documented creation with Oozeq was this ear. 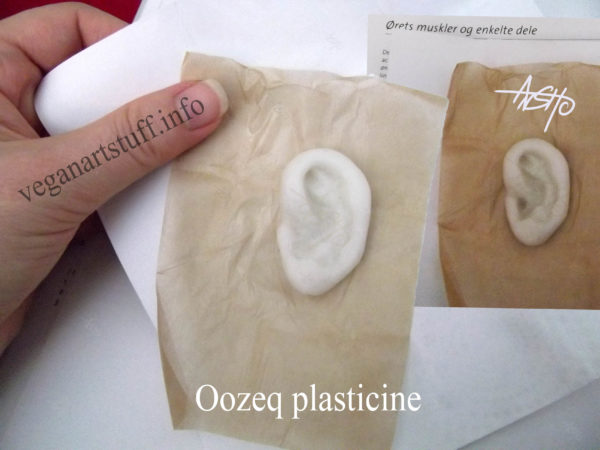 I did notice though, that longer fingernails are definitely not very helpful in moulding out smaller details. At times I felt a bit edward-scissor-handsy, and my creations bear the marks. Trying to smooth out a scratch, I would leave behind another. My poor witch can sing a song of all the scars I gave her. I also used a bit of water to smooth things out (on the witch), which helped but also made the surface a bit sticky. 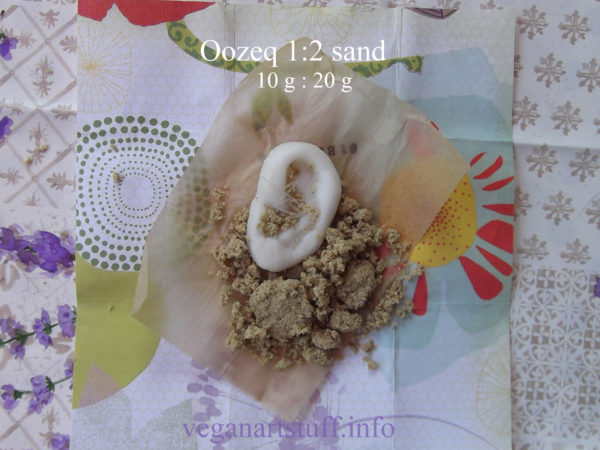 Goodbye ear, hello sandy dough. And it really swallows all the sand,  glitter, or whatever you’ll mix with it and binds it. No sand or glitter on the loose. Next you can see the thaler I imprinted with a sealing stamp. All the fine details are visible and nothing stuck to the stamp. 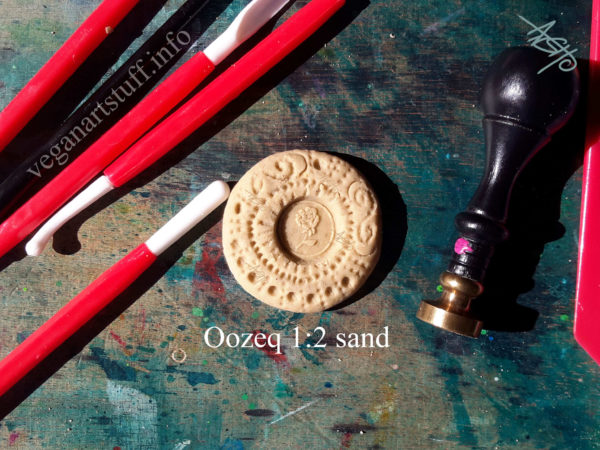 After stamping, I wanted to see, how the sandy Oozeq molded, so I produced this little seal, which I don’t dare to destroy. It went through quite an evolution, if you think about it: From a droplet of putty to a swirl, a rose, an ear, a thaler and finally a seal puppers with beady eyes. 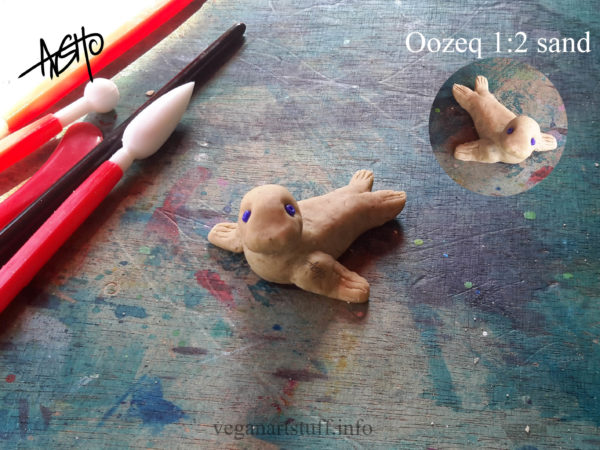 I did also find out that the sand muddied up the dye of the dough. However, this could be because I used the beige-grey playground sand I’ve got to mix in the soil for succulents. 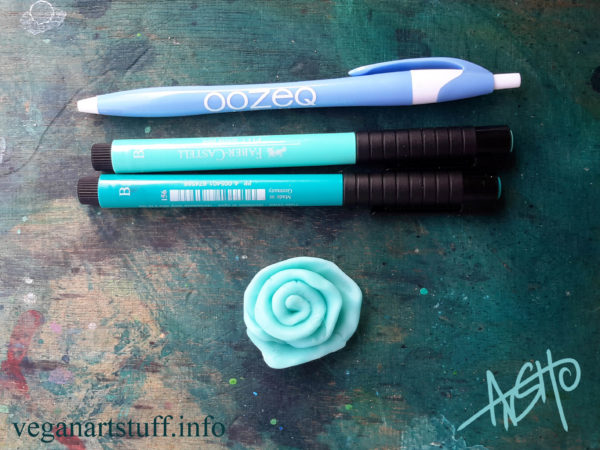 Although I had my eyes set on vegan food dye ( Biovegan) to use on the plasticine, I couldn’t get it and made do with what I had at home. It might though be not what the inventor had in mind with his product. Oozeq is a non-toxic, even edible, plasticine, but I went ahead and dyed it with Faber-Castell Pitt Artist brush pens (see rose above), Daler-Rowney FW acrylic ink and Deltamarker. The colours came out vibrant and the chisel nib of the alcohol markers worked best. Only the black acrylic ink left some light black hued residue behind after rubbing it with gusto on the back of my hand (easily washed off). It suprised me that my hands were not dyed at all, the dough absorbed the colours – no stains, clean hands. I tried shimmery green acrylic ink and the putty kept the shimmer. 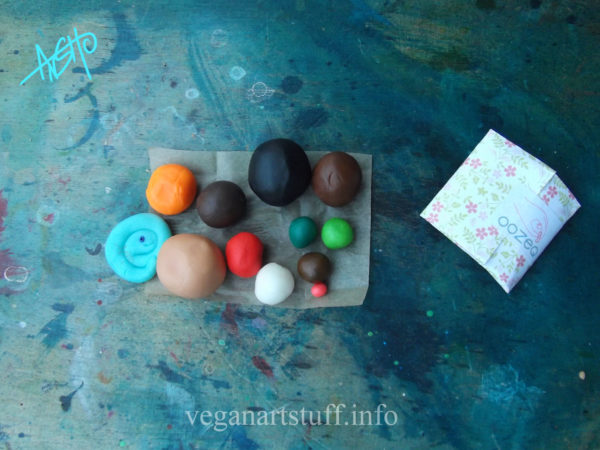 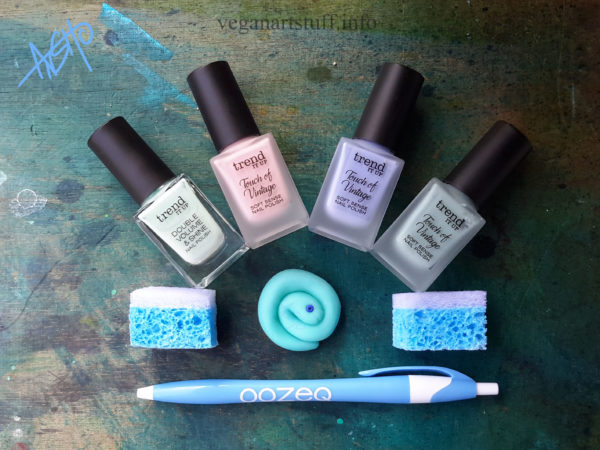 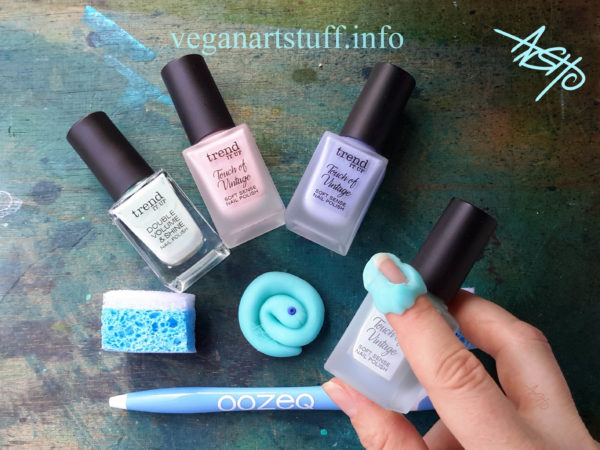 Using it to mask what you don’t want to cover in nail varnish does work. It mustn’t protrude too much, so you still can reach in all the corners with your utensils. I went for an ombre look with a cut up cellulose sponge. It would have looked better, if I used a smoother sponge, but it still worked. Afterwards you  can just fold the putty piece, you used, up again and knead it. The plasticine absorbs the nail lacquer and you can keep on using it over and over again. 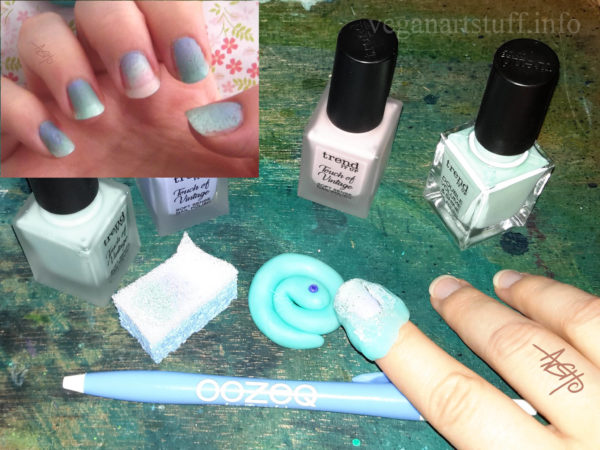 I also tried Oozeq as kneadable, removable glue dots (wasn’t advertised as such, just felt adventurous). You shouldn’t use it on walls or wallpapers (it contains oil) but I did stick the ear, the thaler, the piece of origami paper Oozeq is wrapped in, and on top of the paper the blue snake, to a lacquered door and door frame. They all stayed put. I did remove the ear and the thaler after a couple of minutes, but for a glorious short amount of time “the walls had ears”, well one ear; and it was a door.  The paper stayed on the door for over a day. Then I peeled of the putty. On the paper and the door were ,what you can describe as grease stains (that’s why you shouldn’t use it on wallpaper or painted walls). They came off the door with a sheet of kitchen roll wetted with a water-washing-up liquid combo (in no time).

Finally I come to my “pièce the résistance. Since it being already September and Halloween lurking round the corner (and the worst witch reruns  on  telly), I really wanted to make a little witch. 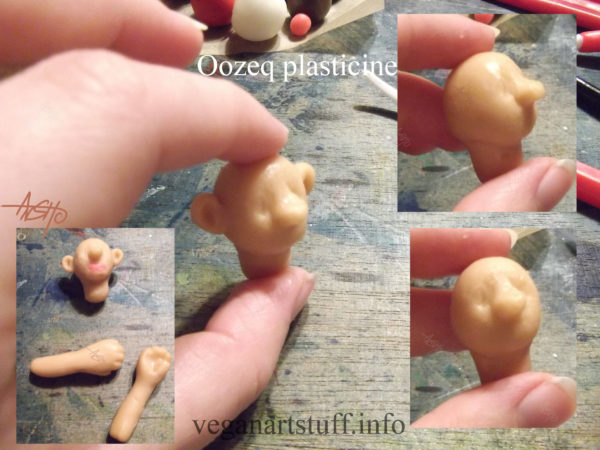 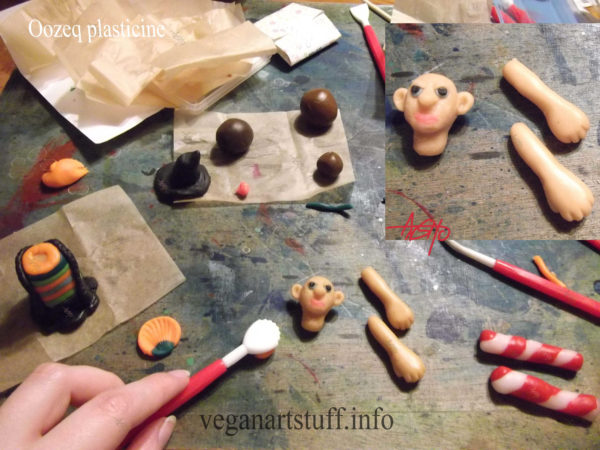 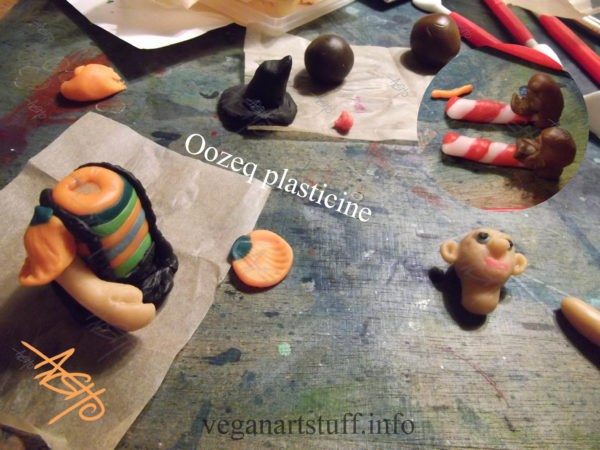 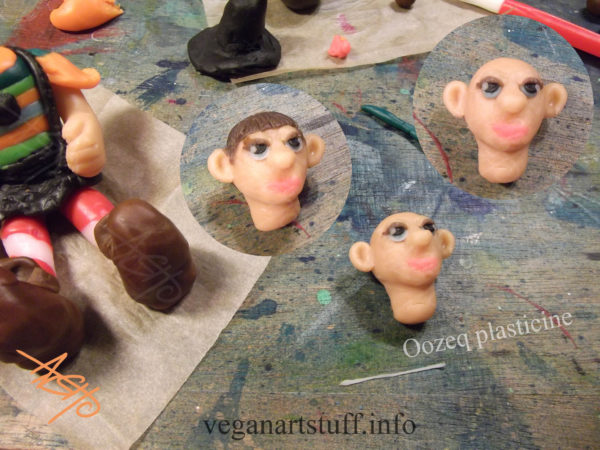 I was able to roll out the finest lines and make the smallest dots (see above) for the highlights and the whites of the eyes. Another mistake I made was mudding up the lashes. Initially I only applied a cat-eye liner in brown. I wasn’t too happy with it (should have chosen black). So I decided to add lashes, also in brown. With the same coloured hair it lacked of contrast. And the poor lashes (2D) got blurred in all the kerfuffle, as did the irides ( well, someone looked up the plural of iris) and the highlights. The pupils ,unfortunately, overtook the space of the irides, there is only a faint blue reminder on the very edge. 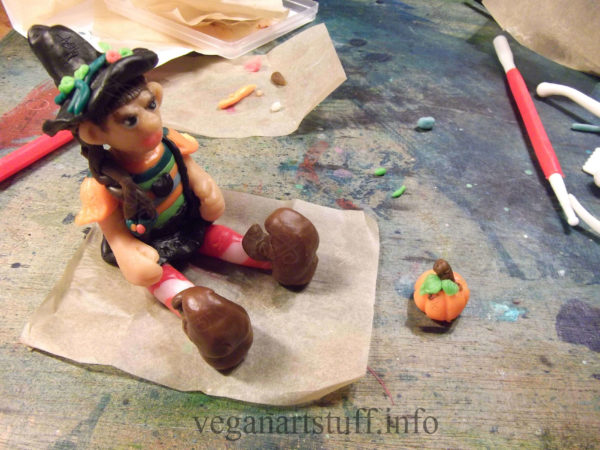 I used  eight Oozeq drops (80g, each 10g) for the witch. From leftover morsels I formed the wee pumpkin, a little black tortoiseshell kitten and the flowery hat band. 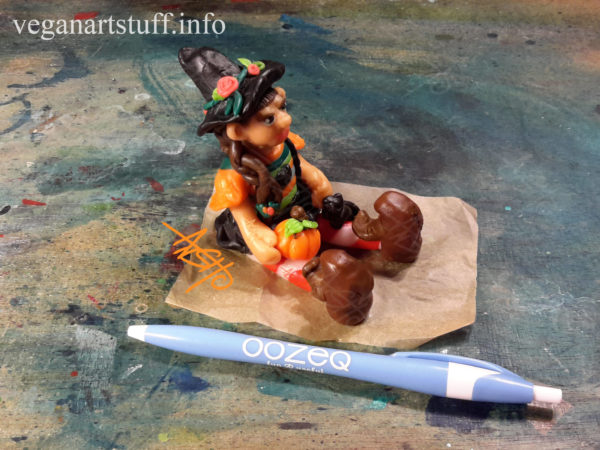 The witch dons some lovely striped stockings, boots/clogs, a striped top with cat head application and petal shaped sleeves and a crooked hat with a little flower garland. As for hair I chose the Mildred Hubble hairstyle : plaited pigtails. 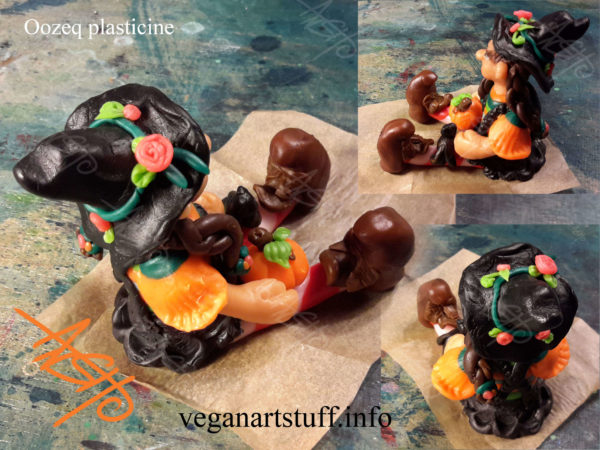 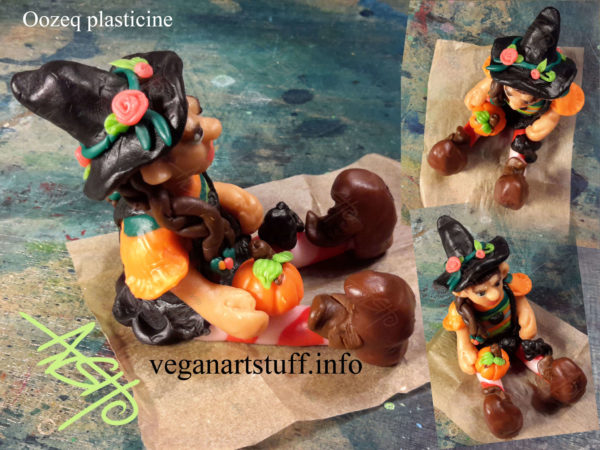 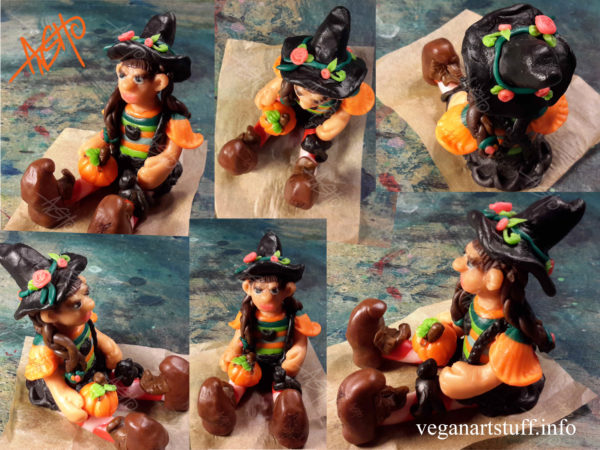 Finally, I want to thank Oozeq’s inventor Bill Zicker , for reaching out and sending me the plasticine. I am glad there is finally a vegan-friendly plasticine product out there, that I could list. I am also glad, I was given the opportunity to try it out.

In case you are very understandably wondering how the little witch is doing: 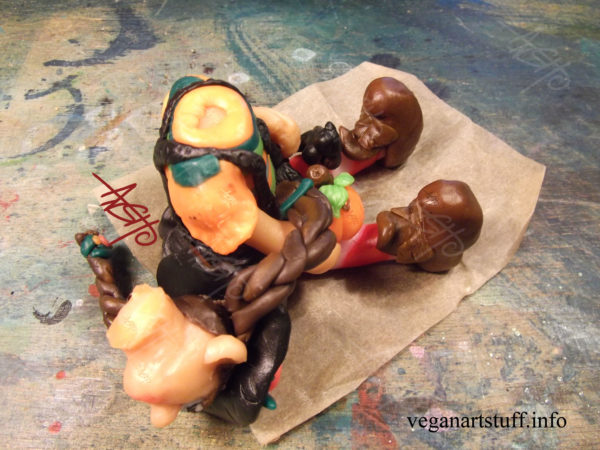 After 1 1/2 days I discovered the poor thing had lost her head and one pigtail plait. This might be partly due to the lack of not having a (wire) spine and because I wouldn’t smush her precious head harder on her neck.

The final part is not for the faint-hearted, because … 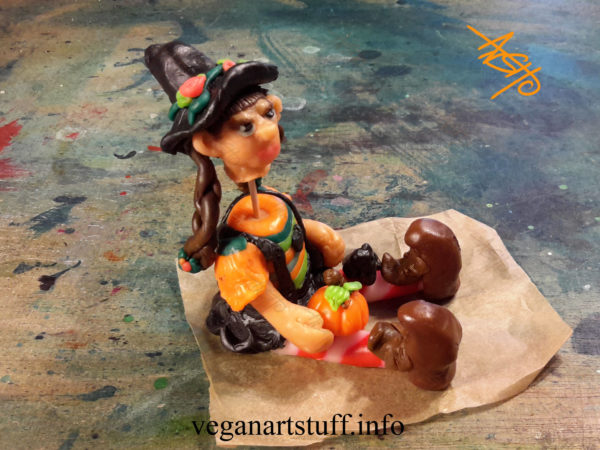 … I had to spike her head on a toothpick to bond it to her body. Since I haven’t shortened the toothpick, the witch still remains in the same state as seen above. But think about it, if you coloured the toothpick green and propped the witch in front of a green screen, she would have a levitating head. The whole situation would be a mishap caused by a spell gone wrong. Other than having a toothpick in her head, she really is doing fine –  kitten and pumpkin weren’t harmed at all.